WASHINGTON (JTA) — An extraordinary debate recently took place in the Senate on whether the United States should remove Iran’s Revolutionary Guard Corps from its list of designated foreign terrorist organizations.

On one side was Antony Blinken, the US Secretary of State, arguing that Iran was not taking the necessary steps to remove one of its main militias from the list. Arguing, on the other hand, that putting the IRGC on the list in the first place was counterproductive, was… Antony Blinken.

“The gain was minimal and the pain was potentially great,” Blinken said at a hearing last month. “The designation doesn’t really win you much because there are myriad other sanctions in the IRGC.”

The two-minute clip of Blinken’s appearance quickly circulated among congressional staff and lawmakers who are closely monitoring how or if the Biden administration plans to re-enter the Iran nuclear deal, congressional sources said. Former President Donald Trump withdrew from the agreement, which in 2015 lifted sanctions against Iran in exchange for restrictions on its nuclear activity, in 2018.

The removal of the IRGC from the US terrorism list, after Trump put it there in 2019, has become a defining issue in the nuclear deal negotiations in Vienna, the Iran team has made clear.

Those negotiations, which until recently seemed almost complete, have stalled as Biden resists capitulating on the issue. The IRGC is an important component of Iran’s military, designated as the protector of Iran’s Islamic identity forged after the 1979 revolution. But the militia goes far beyond preparing for combat; over the decades, it has become a quasi-governmental institution that oversees parts of Iran’s economy, industry, and energy sectors. He regularly calls for Israel’s destruction and backs terrorist and insurgent groups around the world with money, training and guidance.

Second. Blinken argued that the list #IranIRGC on Foreign Terrorist Organization. had minimal impact on strength. its main consequence, he said, was a travel ban on IRGC generals who have no intention of traveling, while millions of recruits are barred from entering the US. pic.twitter.com/1sOeJXVdgU

Along with Republicans, many moderate Democrats, already wary of rejoining the nuclear deal they say is too easy for Iran, are urging Biden to stick to his guns on the IRGC.

Biden, a foreign policy moderate, is believed to be personally resisting delisting, in part because he was introduced to Iraq war veterans through his late son, Beau, and heard malicious stories about Iraqi-trained militias. the IRGC. But Biden also openly supported re-entering the deal before taking office, seeing it as the best means of preventing Iran from going nuclear. 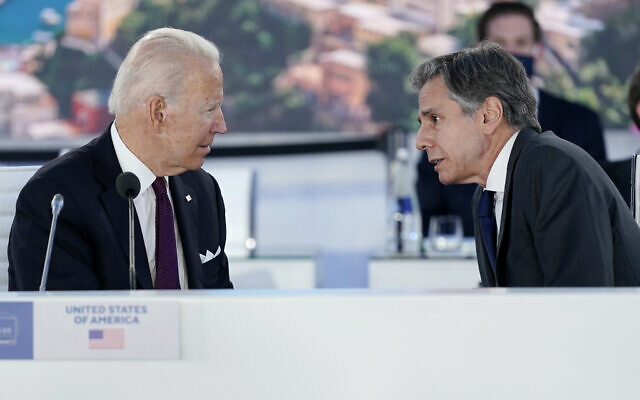 US President Joe Biden, left, speaks with Secretary of State Antony Blinken as he hosts an event on global supply chains during the G20 leaders’ summit in Rome on October 31, 2021. (Evan Vucci/AP)

Blinken’s back-and-forth underscores how tense the issue has become in the administration: On the one hand, keeping the IRGC on the list seems difficult but potentially bogs down the deal; on the other, removing the group from the list accomplishes a key foreign policy goal, but appears weak on international terrorism.

“The IRGC is a terrorist organization, and should be designated as such,” Rep. Elaine Luria, a Jewish Army veteran and House Representative from Virginia, told the Jewish Telegraphic Agency in an email. “They have fired missiles at a US consulate, supplied weapons that have killed thousands of US soldiers, and continue to destabilize the Middle East.” 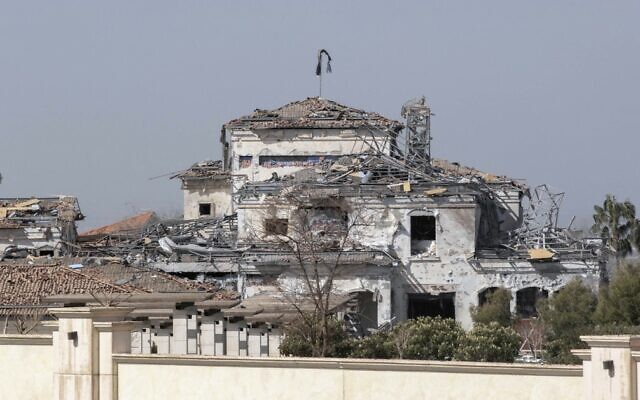 A damaged building near the US consulate office after a night attack carried out by the IRGC in Erbil, the capital of Iraq’s northern autonomous Kurdish region, on March 13, 2022. (Photo by Safin Hamed / AFP)

Adding to the pressure, Biden is set to visit Israel next month for the first time as president. Israeli Prime Minister Naftali Bennett has made it clear that discussing the IRGC is very much on his agenda.

“I am confident that President Biden, who is a true friend of Israel and cares about its security, will not allow the IRGC to be removed from the list of terrorist organizations,” Bennett said in his statement announcing Biden’s visit. “Israel has clarified its position on the issue: the IRGC is the largest terrorist organization in the world.”

In his comments, Blinken said the main sanctions added by being on the US terrorism list are travel restrictions, and “the people who are the real bad guys have no intention of traveling here anyway.” it is illegal for US entities to deal with the IRGC in any financial way.

The IRGC is the only state military on the US Foreign Terrorist Organizations list, something that infuriates Tehran.

But American progressives are also furious because they argue that the FTO debate is a pointless obstruction in the way of a foreign policy priority. Congressional pundits say progressives inside and outside of Congress are pushing Biden to lift the nomination. 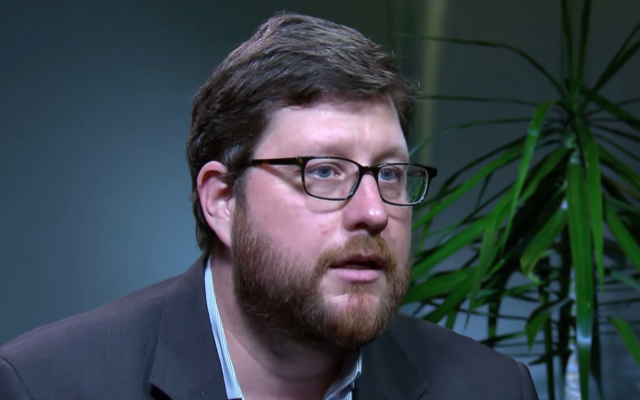 “It was pretty clear to the Trump gang that the point of this totally symbolic appointment was to increase the political costs of rejoining the JCPOA,” Duss said, referring to the formal name of the Iran deal, the Joint Comprehensive Plan of Action. “They were betting that a future administration would be too scared to take the necessary steps to get back into the deal. They are being shown to be right.”

After Trump exited the deal, Iran retaliated by ending some of the deal’s provisions and is now believed to be closer than ever to enriching nuclear fissile material to near weapons level.

“The Iran nuclear deal successfully blocked Iran’s pathways to a nuclear weapon, until President Trump recklessly withdrew the United States from it,” Rep. Ro Khanna, a progressive Democratic leader in California, wrote in an email. “All of us in Congress should support the efforts of US envoy Rob Malley [in Vienna] to protect themselves peacefully against a nuclear-armed Iran and another war in the region, and not allow politicized bluster to stand in the way of what may be our last chance to do so.” 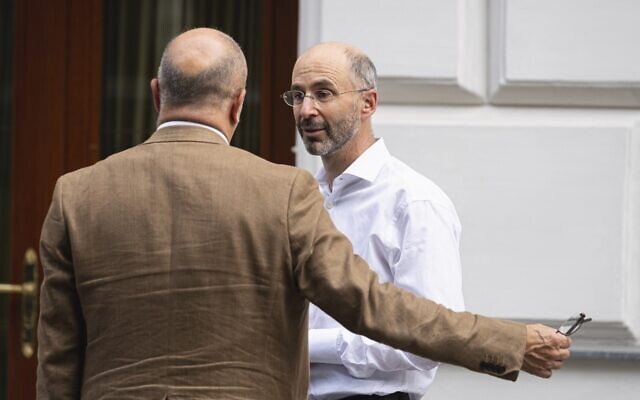 The problem, according to a Democratic congressional staffer closely following the talks, is that there is no political advantage to lifting the designation, especially if a US soldier is killed in an Iranian-backed attack.

“A poor child is going to be killed by an Iranian drone and that child will be the face of every TV commercial for the next three years,” said the staff member, who requested anonymity to speak freely.

One possible compromise, the staffer added, is to keep the IRGC’s Quds Force, its external operations arm, on the terrorist list while delisting the broader organization. It is unclear whether this would appease Iran’s negotiating team.

“Poll after poll shows that not only a majority of voters overall, but also a large majority of Democrats and a large majority of Jewish Americans want the deal reinstated, and it’s important to remember that no lawmaker who voted for the deal in 2015 he lost his seat to someone. who opposed the deal in 2016,” said Dylan Williams, senior vice president for policy at J Street, noting that, at the time, some figures close to the American-Israel Public Affairs Committee predicted electoral fallout for Democrats who favored the deal. of the agreement.

“I think it’s also clear that the Republicans will attack any outcome, whether there is a deal or not,” he added.