When I started up Citizen Sleeper last night, I had no idea what I was in for. I’d seen some rumors about it online and thought I’d give it a try – it was on Xbox Game Pass after all, and the main art looked right on with the slick and punchy cyberpunk/sci-fi aesthetic that I particularly like . Little did I know that a few hours later I would be playing a game that I would recommend to everyone right now.

Now, I’m about four hours on the road, and there’s the potential to crash and burn, but something tells me it’s not going to happen. Citizen Sleeper, as a game, is somewhat hard to explain: it’s a sci-fi, story-driven RPG with no combat (at least until now), a dice-rolling mechanic that dictates everything, minor survival systems, and a rotating cast of characters where you immediately want more of them when you meet them. You interact with a circular space station/sci-fi metropolis where the game takes place from a zoomed out, almost divine perspective.

None of this amounts to anything you can imagine in your head, right? That’s what I went through when I read its description on Game Pass, and the curious confusion you (hopefully) feel is what I felt after reading several tweets calling Citizen Sleeper a great game. Instead of trying to sell you all that now, let me tell you the premise of Citizen Sleeper, which got me damn close into an existential spiral and immediately piqued my interest. In what felt like moments, 7pm turned 11pm last night, and I went to bed cranky, desperate to play more, because sometimes I’m a responsible adult.

You are a Sleeper, a digitized consciousness implanted in an artificial body – basically a robot with someone else’s mind. Who is someone else, well, yourself. The real you sold their consciousness to a mega-corporation (we’re talking about a… Blade Runner cyberpunk company here) so that they could use it, in an artificial body, to work for them. However, you escaped and now the suits want you back. That escape scenario is fine, and it pretty much puts Citizen Sleeper’s stakes on the line, but the idea that you’re a copy of your real self, who sold you to work for a mega-corporation is a concept I can’t get get out of my mind. 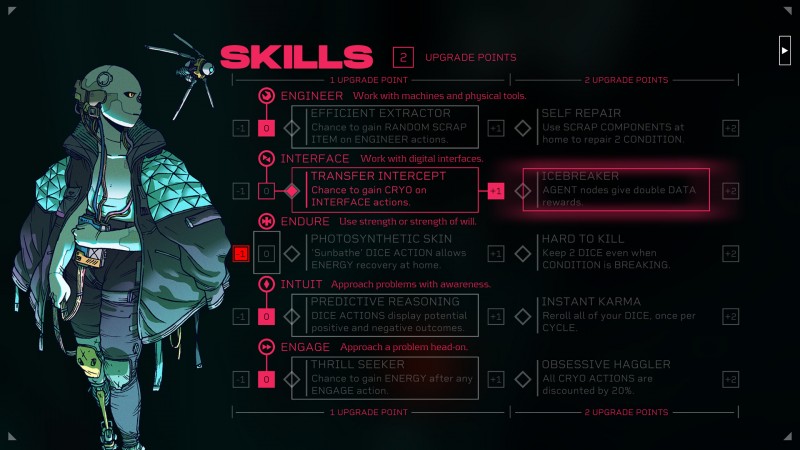 Imagine waking up cold and empty of real life, just a shell of what you know a human being is. Only you don’t know what a man should be; you only have an idea about the experience. Instead, you’re a robot with memories that feel like your own, but you know aren’t yours at all. You contain the feelings and sensations of the human body and mind that have given you away. The design forces you to despise the real you. How could you do this to yourself? Why did you do this to yourself? Would you care about an artificial body with a copy of your conscious one seemingly light years away, or are you perfectly capable of pawning your mind for quick cash? These are the questions Citizen Sleeper has in my mind, and it’s what drives the story of this tabletop RPG video game.

The game unfolds over cycles aboard Erlin’s Eye, the circular space station I mentioned earlier. As a sleeper, your body is constantly deteriorating, and it should – the company you own built that downside to make sure you keep coming back to them, because only they sell what you need to restore your health. The worse the status of your artificial body, the worse the dice will be dealt to you at the start of each cycle. These dice dictate everything – to perform almost any action, you roll a die. The outcome is either positive (with effects such as filling and completing an objective bar), neutral (maybe nothing will happen), or negative (you may lose energy). Better dice increase the chance of a favorable roll, and of course, worse dice are more likely to lead to unfavorable outcomes. 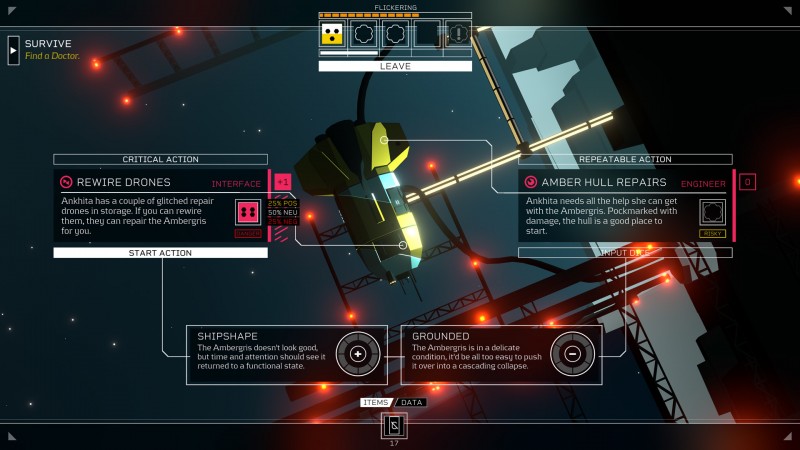 Let me walk you through what a cycle might look like to help you understand this better: your fitness is good this morning, so you wake up with two really good dice, an average dice, and two not so great dice. To make sure your fitness is solid tomorrow, you’ll need to complete a task on the station that will give you more of the game’s currency. You roll a medium level die because you don’t need a lot of money – just a decent amount. You get the money you need, so you go to the doctor at the station to restore your health. Now you go to another target. You help someone repair a ship. Rolling positively promotes repairs, but negative rolling pushes it further to fall off the edge and crumble into space. That’s why it’s crucial to roll positively or at least neutrally. You use one of your really good dice to ensure a positive result. Hurrah!

You then find yourself running out of energy – when it runs out, you begin to starve, which weakens your fitness or health. So you go to a food stall to restore your energy. You use your remaining dice for other purposes, and when you’ve used up all your dice, you don’t need to do anything. So you return to your “home” and end the cycle. You wake up and do it repeatedly, with different dice, objective progress goals, and different people to meet and work with.

It’s a mechanism that makes more sense after a bit of playing, and I highly recommend not breaking a sweat over it. Just play the game and it will all click into place. And if so, you’ll be rewarded with a fascinating story that highlights the stress of simply trying to survive within the confines of space capitalism, the idea of ​​self-ownership, and the concept of creating a new life out of your control. treated, no matter how useless it may feel. 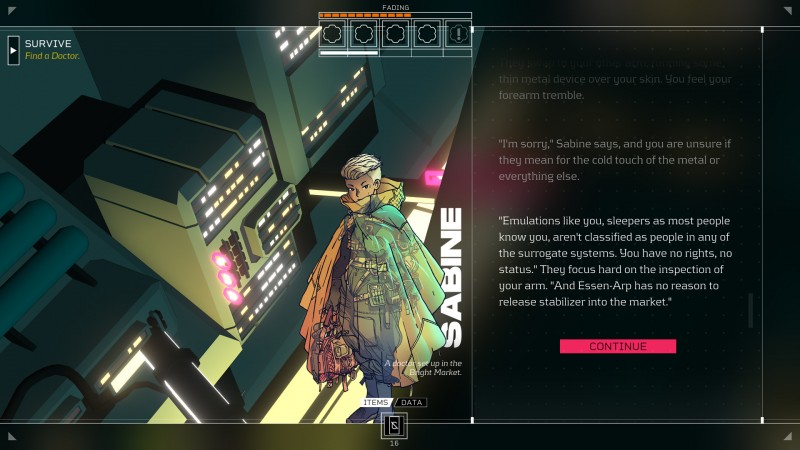 I’m not exactly sure where Citizen Sleeper is headed, but I’m fascinated by the premise and design of the gameplay. It features beautiful art and what I’d call the best soundtrack of this year, too, so it’s a particularly great time to play it. If none of this has convinced you to give it a try – mind you, it’s on Xbox Game Pass too, so if you’re already a subscriber, checking out will only cost you your time – I’d still say give it a shot . On paper, I didn’t say Citizen Sleeper would be a Wesley game, but after four hours of playing, it’s all I want to play.

Citizen Sleeper is out now on Xbox Series X/S, Switch, and PC.

Have you played Citizen Sleeper? Let us know what you think in the comments below!