Confirmed at this level, ROYAUMONT (9) took third place in the Quinté+ on 31 March before his comeback on the sands of Chantilly. Reconnected with Stéphane Pasquier, this native of Fabrice Chappet should still dearly sell his chances of his return to the grass. Very prominent in his last attempt at Saint-Cloud, GOLDINO BELLO (14) will form the opposition with SHIELDING (5), third in the same event in 2019. Fifth in the Quinté+ on March 21 in Compiègne, for his first attempt at this level, QUARTZDARGENT (7) then comes before GAGNESIRY (15), the shape of which is certain. Dean of Quinté+, BAYOUN (3) remains competitive despite being 9 years old. He will complete our pick with LOISABA (12), at the start of his first handicap, and AFRICAN GRAY (16), well placed at the bottom of the table.

This son of the Holy Roman Emperor has had three successes this winter and now has less space. Forced to carry the heavy load of 60 kilos here, he seems to be faced with a rather delicate task here.

“After a good winter, Nordeste (1) now finds more difficult tasks with an upward adjusted value. He is fine in the morning and always tries his best in the race. He will need a hidden route to hope to make it to the finish. †

This Morandi son at the start of the year won twice in Pau and proved his competitiveness in the handicaps on his penultimate stage by finishing third at Mont-de-Marsan. In value 40.5, however, the margin remains reduced.

“Orandi (2) has made us very happy since he joined the team. I loved his last race, especially because he was carrying a lot of weight. A very flexible trajectory would serve his interests. The horse stayed very well in the morning. I think this is the best chance of my three boarders. †

At 9 years old, this son of Kouroun is none other than the dean of this Quinté+. Second last year in the same event, he is particularly happy at the Bordeaux circuit and promises to be competitive again.

“Bayon (3) is a super horse who does all his racing and is very happy on this track. He seems to have recovered well from his recent efforts. The ground will not concern him. It will again give everything in this Quinté+. I believe it. †

Resuming his contact with the competition, this native of Antoine de Watrigant definitely won on this course on April 1. Despite a 3.5 kilo penalty, he can still do well.

“I was pleasantly surprised by the victory of Fly d’Aspe (4) before his return. In the morning he is in good shape and I think he is capable of winning his penalty. Even if he just won on very soft ground, I’m not sure the arrival of the recent rains will be of any benefit to him. †

Ninth in a Quinté+ in Saint-Cloud on his last attempt, this native of Stéphane Labate will find here a circuit he likes. Third in the same event in 2019, he deserves to be watched closely.

“Screen (5) didn’t run so badly last time. On Monday he will find a track he particularly likes and the softening of the ground will work in his favor. I am confident to finish in Quinté+. †

After eight and a half months of absence, this son of Dark Angel had to find his way here on April 1. Winner of the 2018, 2019 and 2021 editions of this Quinté+, his candidacy cannot be ignored, even if the degree of form remains uncertain.

“Ascot Angel (6) has had some health problems. Before his return, he weakened to finish, but without penalty. He needed this race and I think he has improved since then. I think it is competitive for this value. I’d like to see him take a seat. †

This native of Philippe Sogorb, author of a triumphant comeback in February, confirmed his good spirit by finishing fifth in the Quinté+ on March 21 in Compiègne. Along the way, he would still have to retire from the game.

“After winning his comeback, Quartzdargent (7) has just proved that he is competitive for this value. It is a fairly manageable horse that appreciates the soft spurs. I believe it is capable of ending in Quinté+. †

Decked out in Tony Parker’s uniform, this son of The Gurkha shows commendable consistency overall. With a good number in the stalls for his first attempt at a handicap, he will have supporters.

“Only 4 years old, Afghany (8) is very consistent in conditional races. For his first handicap, he is put on a weight of suspicion. It has already proven itself on soft, even deep tracks. He wouldn’t surprise anyone by finishing on the finish line. †

Confirmed at this level, this native of Fabrice Chappet finished third in the Quinté+ on March 31 before his comeback on the sands of Chantilly. Again associated with Stéphane Pasquier, he should still have to sell his chances dearly for his return to the grass.

Known at this level, Royaumont (9) has just had a good run before his return. He finds the grass again, but that doesn’t have to be a problem for him. He diligently seeks his race. It is a logical opportunity in this lot. †

With the exception of her failure on January 19 in a Quinté+ in Cagnes, this daughter of Inello has never finished more than third in her last eleven stages. In value 38 it has yet to be viewed in such a field.

“Becho (10) is a chic mare. She just showed her form. It should not be condemned for its failure in January in a Quinté+ in Cagnes. Its value has been revised downwards, making it a good card to play. She did well on this track twice and the soft ground will be an advantage. †

In sight this winter at Cagnes with two claim level successes and a fifth place in a Quinté+, this 5-year-old gelding was not unworthy here on April 1 (fourth). At the end of a favorable course, a small place remains within reach.

“Oxalis (11) always does his best. It has no leeway at this level and I have doubts about its ability to drive on very flexible tracks. A place would fill me. †

Former resident of André Fabre, this new recruit of Xavier Thomas-Demeaulte could not be dangerous for his return on March 22 at the fiber of Chantilly. At the start of her first handicap, she will probably show clear progress here.

“Before his return and his first appearance for his new coach, Loisaba (12) was unconvincing. She competes for her first handicap and can do without it against her elders. It has undoubtedly made progress in its comeback race. To keep it or not is a matter of impression. †

Seriously, this son of Swiss Spirit regularly gives the best of himself. Third behind Fly d’Aspe (4) in the reference race on April 1 on this course, despite his number 15 in the standings, he will again try to achieve a good classification.

“Swiss Bank (13) is a very pleasant horse who always gives the best of himself. He is boisterous in the morning and finds a song he likes. Follower of flexible tracks, I’d be disappointed if it doesn’t go well. †

This son of Anodin, who won three consecutive awards in Quinté+ last season, just took the same ranking in the April 5 event in Saint-Cloud. Again, we will have to take him into account.

“Goldini Bello (14) finished well last time. It is really practical and adapts to all conditions. He stayed very well in the morning and seems close to his race. It will all be a matter of course, but I am leaving with a lot of confidence. †

Although she was penalized with 2 kilos for her success at the beginning of the year in Pau, this resident of Didier Guillemin kept her competition well on March 12 in a handicap at Mont-de-Marsan (second). Even if she is here facing her elders, a surprise from her is perfectly possible.

“Gagnesiry (15) will participate in his first Quinté+. She is in good shape but is rising in category and will be dealing with more confirmed horses than her at this level. The filly will have her talent for soft runs and her good string number by her side. It needs a selective race to show its full potential. †

After four and a half months of absence, this Kendargent son was not unworthy in the key race on April 1 on this course (fifth). Second in a Quinté+ last June in La Teste, should not be neglected.

“I am satisfied with the comeback race of African Gray (16). He has since improved physically and works well in the morning. I think it is competitive at this price point, especially since the recent rains will serve its interests. I expect a good performance from him. † 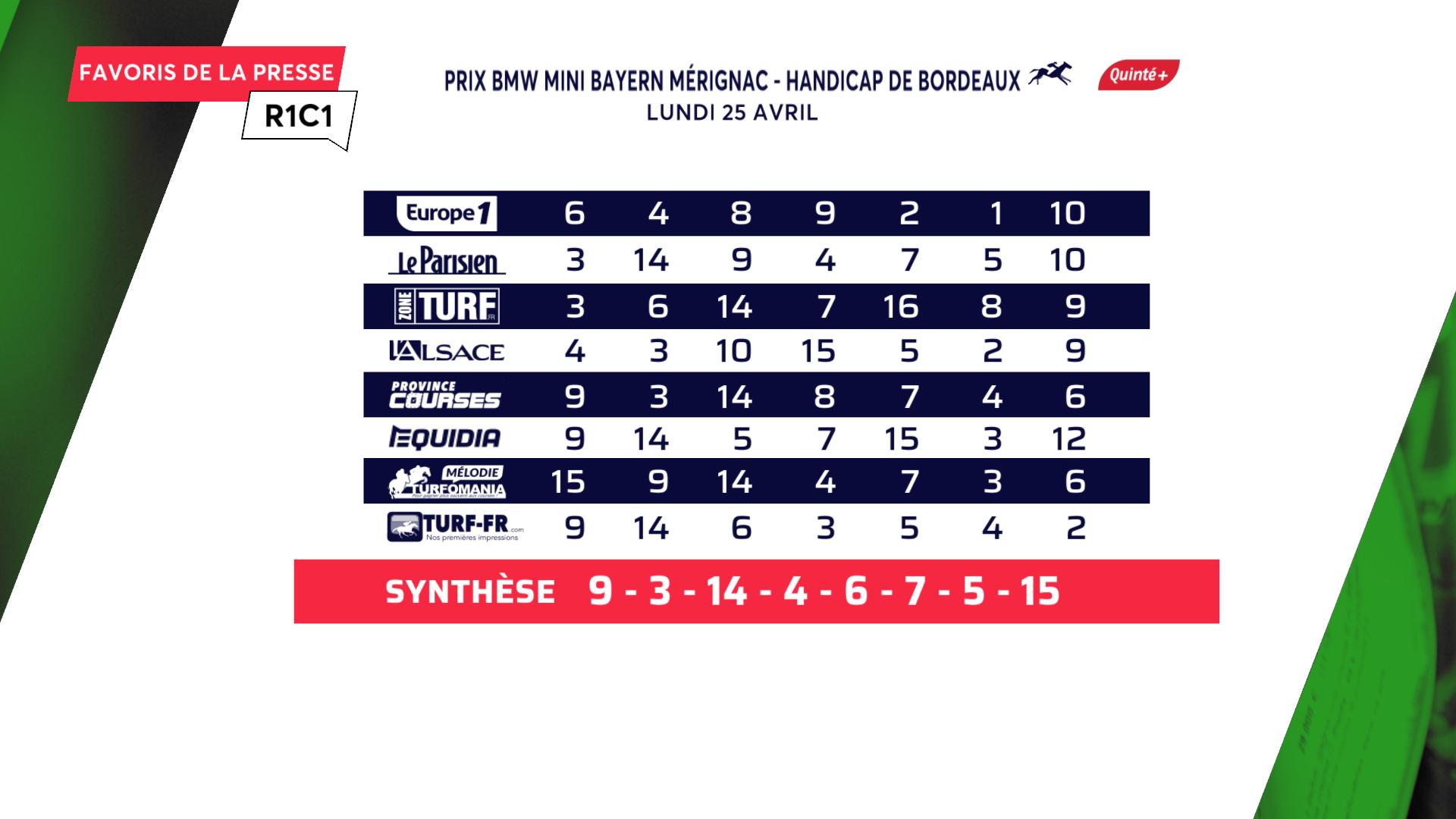