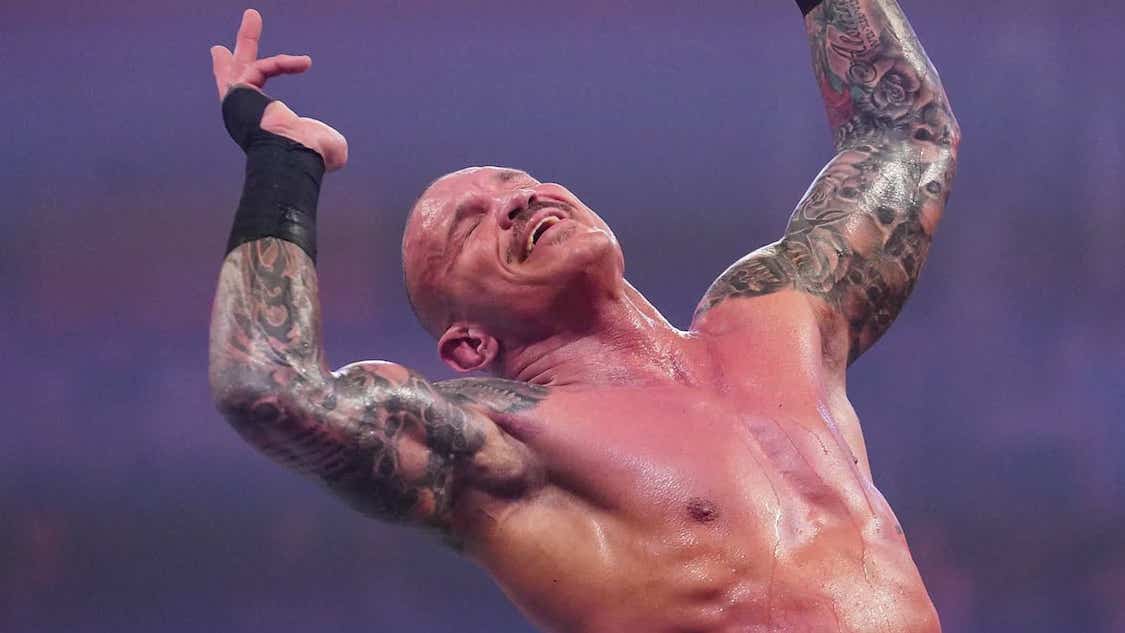 On the program for this April 25, 2022 episode of WWE RAW, we celebrate Randy Orton’s 20-year career, Bianca Belair defends her RAW Championship title against Sonya Deville, and Theory is a guest at the Miz on her Miz TV. As a bonus, two surprises return (or almost, if you’re following the news).

Tonight’s episode of Monday Night RAW isn’t just an episode, it’s the episode celebrating 20 years of Randy Orton’s career. For the occasion, an audience of Superstars gathered around the ring as Riddle gave a short introductory speech to his tag team partner.

Randy Orton makes his appearance after a short music video chronicling his career and for the audience of Knoxville in Tennessee, his hometown, who chant his name. Randy Orton tells us how happy he is to be working with Riddle, that he has never had so much fun and that it fueled his passion. He hopes the fans won’t get tired of him, because he won’t be leaving anytime soon.

He begins to thank a whole host of wrestlers who have crossed into WWE during these 20 years, John Cena, Shawn Michaels, Triple H, Undertaker, Mick Foley or Ric Flair. He also thanks Riddle for all the fun he brings to him, and the fans who have always supported him. Riddle says he has a surprise for Randy Orton, someone who respected him and considered him a friend: Cody Rhodes. The two former partners in The Legacy embrace.

Seth Rollins disrupts the party, he advises Randy Orton not to trust Cody Rhodes, that he is there to steal the spotlight from him, that he wants to bring everything back to him. He goes on to explain that despite this celebration, the new generation will not be inspired by Randy Orton or Cody Rhodes, but by Seth Rollins.

Ezekiel arrives to greet and introduce Randy Orton, Kevin Owens interrupts and drags him out again as a liar. The Usos also pause for their WrestleMania Backlash match. Adam Pearce enters, inspired by these verbal fights, announcing a four-on-four match in the main event: Cody Rhodes, Ezekiel and RK-Bro against the Usos, Seth Rollins and Kevin Owens.

Kevin Owens taking advantage of the moment to go after Ezekiel but gets an RKO from Randy Orton.

Belair vs Deville, three games for the price of one

The RAW Championship title match between Bianca Belair and Sonya Deville is the first matchup of this episode of WWE Raw.

Bianca Belair defeated Sonya Deville by counting out, but Deville denies the result and explains that she slipped on the water and starts the match again with the determination no count.

Bianca Belair defeated Sonya Deville by disqualification, this time because Deville hit Belair with a chair in response to a hair swim. Deville therefore announced that the match would be without disqualification.

Bianca Belair defeated Sonya Deville by attacking with his KOD. This time it was the right one, the match ended well despite attempts by Carmella and Zelina Vega to intervene. Deville would try to win the match on a chair worn DDT, but was unsuccessful.

Behind the scenes, Sonya Deville finds Zelina Vega and Carmella, who surrounds them with flower garlands. The two wrestlers begin to raise their voices, but both take a punch. “I’m still your boss” remembers Sonya Deville.

Edge sits on his throne in the dark with Damian Priest. Announcing that the latter will take the job tonight against Edge, he mocks the fans of Knoxville and their soccer team, AJ Styles, and his injury. He returns to Bálor, who he believes will undergo his “Day of Judgment”, which appears to be the name of his clan.

Veer Mahaan a battu Sam Smothers by submission with his cervical clutch. As usual, a squash followed by a post-match beating, this time to the commentary table where the poor jobber will once again undergo Mahaan’s submission.

Bobby Lashley and Omos are supposed to meet in the ring, but not before a match. As announced, the two wrestlers will face each other in an arm wrestling match. MVP is on the side of Omos and during the standoff, while MVP taunts Lashley, he gains strength and defeats Omos.

As expected, the segment turns into the punching of Bobby Lashley who is crushed by Omos with the arm wrestling table.

Tamina and Akira Tozawa defeated Reggie and Dana Brooke by attacking Reggie with a senton from Tozawa. Tozawa also tried to pin Dana Brooke after the match to claim the title, but Truth held him back…then took a chance too.

Becky Lynch, in a Lady Gagesque outfit and the totally crestfallen face of a day after the evening with much regret, arrives in the ring painfully. It’s been three years since someone beat her for the RAW Championship title, so she’s in trouble.

She says she’s bottomed out, but when you’re down, you can only go up. It’s the beginning of Becky Lynch’s comeback, she says. She will find her way back to the top and dethrone Bianca Belair to become champion forever, and no one can stop me.

But suddenly surprised: Asuka is back. “I’m going to stop you, because no one is ready for Asuka!” † The two wrestlers start to fight, but Becky Lynch leaves the ring, it won’t be until tonight.

Damian Priest comes in with Edge for the next game. Edge sits on a throne that slowly rolls down the ramp (very slowly, thankfully they don’t all come to the ring like that) and Priest stands on the rolling platform. Priest confronts Finn Bálor.

Damian Priest beats Finn Bálor by pinfall with a chokeslam and a flatliner. Bálor was distracted by Edge. Because he got up from his chair. It costs little.

The Miz has as a guest on his Miz TV the new champion of the United States, Theory, who reminds him a bit of a few years ago. Theory says he has great respect for the Miz and plans to live up to the compliment he just received.

Theory wants to prove he is the best investment Vince McMahon has ever made and plans to take the US Championship title to new heights.

Then comes the second surprise of the evening: Mustafa Ali, who finally returns to Monday Night RAW after a few months of absence due to a dispute with Vince McMahon. The teasing about the absence and the reasons for it are rife in Theory and the Miz.

Mustafa Ali replies to the Miz that he should just watch him struggle for fun. Ali also challenges Theory to a US Championship match, but Theory declines. Ali then implies that Theory acts like the Miz and runs away from the fights. There is then talk of a match between Ali and Miz, but the latter says he does not have the powers to make it official. Unfortunately ? Not so sure, Theory says he texted Vince McMahon and the match is now official. The Miz is… excited? Unsure.

“I’ll make you regret not getting your resignation. † lose the Miz before the match. The foundations have been laid.

Mustafa Ali defeated The Mizu by pinfall with a crib to counter the figure four.

While Mustafa Ali celebrated his victory on the slope, Ciampa attacks him by surprise. By the way, Ciampa also lost his first name. This craze is getting hellish.

In an interview, Rhea Ripley explains that she has finally opened her eyes: she is much better alone. She managed to win the RAW title on her own, but since then she’s only had partners who have slowed her down. Liv Morgan suddenly arrived to attack her, several officials came to separate the two wrestlers.

The main event of this episode pits RK-Bro, Cody Rhodes and Ezekiel against Usos, Seth Rollins and Kevin Owens. Everyone has time to make their entrance and all wrestlers start fighting in the ring at eight o’clock before the start of the match.

Cody Rhodes, Ezekiel, Randy Orton and Riddle beat Seth Rollins, Kevin Owens and the Usos by pinfall with an RKO from Randy Orton on Jey Uso. All the heels of the match were entitled to their little RKO in the match for the finals, it’s Randy’s party.

This episode of WWE Raw ends with celebrating faces with the audience, no other surprises to close out the night.

A pretty decent episode of WWE Raw without being unbelievable. The party around Randy Orton offers good times, the returns of Mustafa Ali and Asuka are good for the red brand roster. The triple match of Bianca Belair and Sonya Deville was simply not necessary.